After summiting Everest, the world’s highest peak, we returned 10am to South Col. At 3am the night after, a brave group of 4 of us set again and climbed Lhotse, 8,516m the world’s 4th highest peak as well.  The Everest+Lhotse double team: Dean Staples from New Zealand (lead guide and 9x Everest summiter), Ang Gelu Sherpa (4x Everest), me (1x Everest), Rinjit Sherpa (1x Everest).

I believe I’m the first Swede to have done the Everest/Lhotse double (one right after the other), and trying to check this formally with the ministry/Elizabeth Hawley, which may take some time… [If anyone knows of any other Swede who has done this before me, let me know]

The first picture is from the summit of Lhotse, in the morning of May 22, and the second one is from the same afternoon when were back down in Camp 2 – where it was way less windy – Ang Gelu dressed in matching Swedish colors haha! 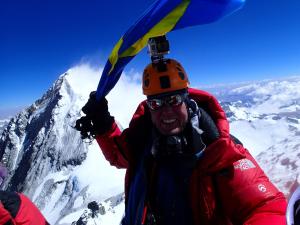 Pursuing the challenge of climbing Mt Everest in the 2013 season (April/May) - and raising money for the charity dZi Foundation to build a school in Nepal. Please support this charitable cause with your donations